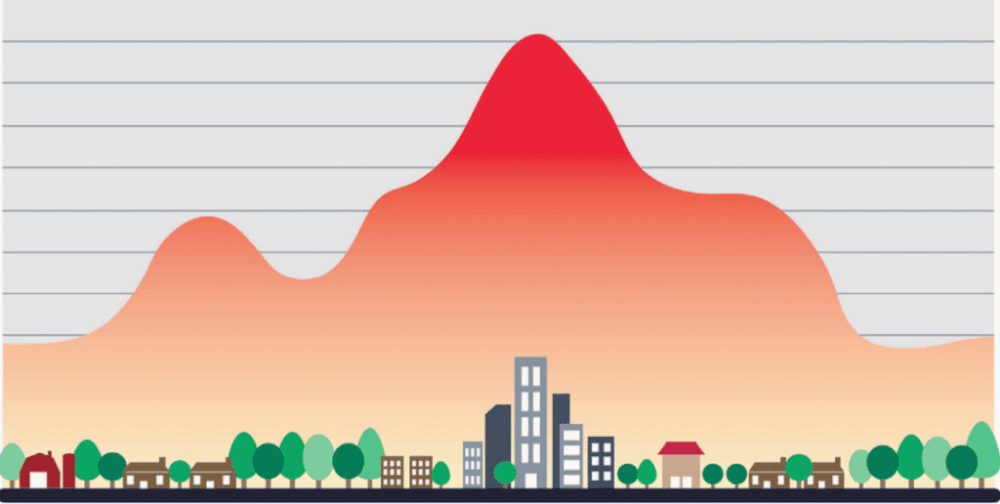 Urban heat islands can have adverse impacts on the environment and human health.

Impacts on the environment

Urban heat islands contribute to the formation of smog. Composed of fine particles and ground-level ozone, it is formed when sunlight, heat and pollutants (nitrogen oxides (NOx) and volatile organic compounds (VOC)) react. In most of the world’s major cities, Montreal and Quebec City are no exception, there is an increase in smog episodes, even in winter.

Heat has an effect on indoor air quality because it promotes the growth of dust mites, mould and bacteria. In addition, certain toxic substances, such as formaldehydes, contained in glues used in the manufacture of furniture and building materials, are released during high heat.

Indoor air cooling and refrigeration requirements are leading to an increase in energy demand. In Québec, most electricity is produced by hydroelectric facilities, which has the advantage of producing very few GHGs, unlike other places in the world where fossil fuels such as oil and coal are still used.

The increase in the number and duration of heat islands has already and will continue to increase the demand for drinking water, for cooling (e.g. swimming pools and water features) or for maintaining landscaping. But there is no excuse to wash your car or driveway with water!

During hot weather, urban heat islands can create what is known as heat stress for some people. This can manifest itself as discomfort, weakness, loss of consciousness, cramps, syncope, heat stroke, and even increase pre-existing chronic diseases such as diabetes, respiratory failure, cardiovascular, cerebrovascular, neurological and renal diseases, which can lead to death.

The problem has become so important that the World Health Organization (WHO) has recommended that health agencies in many countries implement urban heat island programmes and strategies. Including in Quebec!